Measure for Measure is Confluence Theatre Company’s inaugural work and what an auspicious beginning. Performed in modern, styled clothing, with American accents, quick pacing, live music and audience interaction it was a delight to watch and listen to. Based on this first show, I can’t wait for what this company does next.

The play, which is not usually one that is performed from the Shakespeare canon, centers on Angelo (Logan Black), who desires the nun Isabella (Ellen Kirk). Angelo will free Isabella’s brother Claudio (Jay D. Love) from prison if she gives her virginity to him. She wails against misfortune, because how can she let her brother die or let her virtue be tarnished? Vincentio the Duke (B. Michael McFarland) , in true Shakespeare fashion, plays a friar in secret to eventually entrap Angelo by having him meet to sleep with Isabella but he sleeps instead with his previously betrothed Mariana (Bethany Elliot). In between is intregue and debate, and conflict within Angelo’s trusted advisor Escalus/Provos (Megan Sells) on whether to follow the seemingly unjust execution order.

The beauty in the play is the layers. Angelo states that the ‘law has been asleep’, in punishing those who break the law, but Angelo now has the strength to enforce the law. Claudio is in prison simply for getting Juliet (Lydia Miller) pregnant. Angelo is the man to punish those crimes. However, as virtuous as he wishes to uphold the law, he is a villain, taking advantage and mocking Isabella that if she told anyone of his advances ‘who would believe you over me?’ It is easy to see why this play was chosen to be performed. Angelo makes clear that Isabella will not be believed if she accuses him publicly, and that is what the ending scenes debate – how could women dare accuse a man of such integrity of such terrible things?

In the midst of this serious plot line, as in all of Shakespeare’s works, there is the humor. In this work, there was a lot that was masterfully paired with physical bits and gags. Lucio (Hollis Wilhoit), Pompy (Frank Lillig), Friar Peter/Froth/Abhorson (Bryce Ostrom), Barnadine/Mistress Overdone (Alisa Lynn), and Elbow (Bethany Elliot) had incredible physical humor– they used ropes, bottles of booze and sad bits of wedding confetti to add hilarious touches at the right times.

It was wonderfully performed and excellently directed. The only part that was unnecessary was the smoking of a vape pipe by Escalus/Provos. I assumed at first it was a set up to a joke, but it seemed to be unnecessary actor business that had no impact on the story and was very distracting. The Squeezebox worked as a theatre for the show, but it is an interesting space. It is a small, black box theatre, but it isn’t crowded like most other black boxes can be. However, the thick black curtains (that seem to absorb sound) and noisy air conditioning forces the actors to project their voices heavily in a small space. The main door is stage right, which caused an interesting distraction when someone opened it during the show.

Despite the space’s quirks, or because of them, it’s a beautiful space, and it was a brilliant evening of theatre. I am looking forward to more work by the company and other work in the space. Bravo. 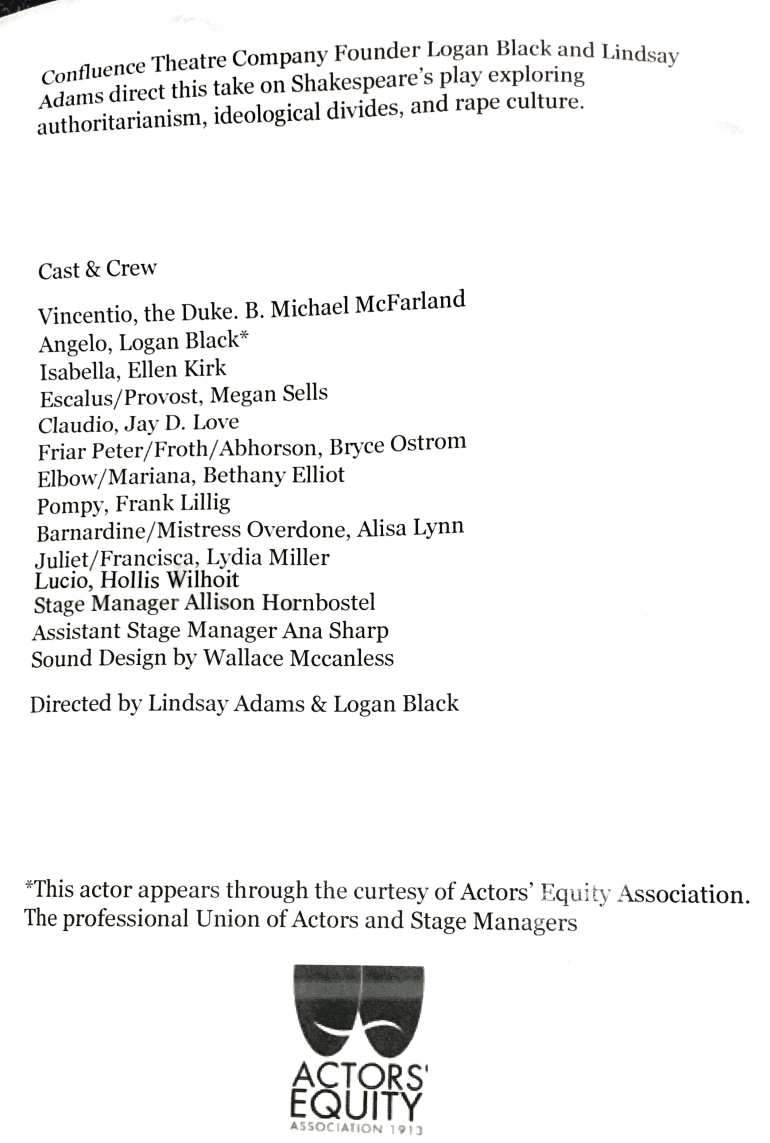 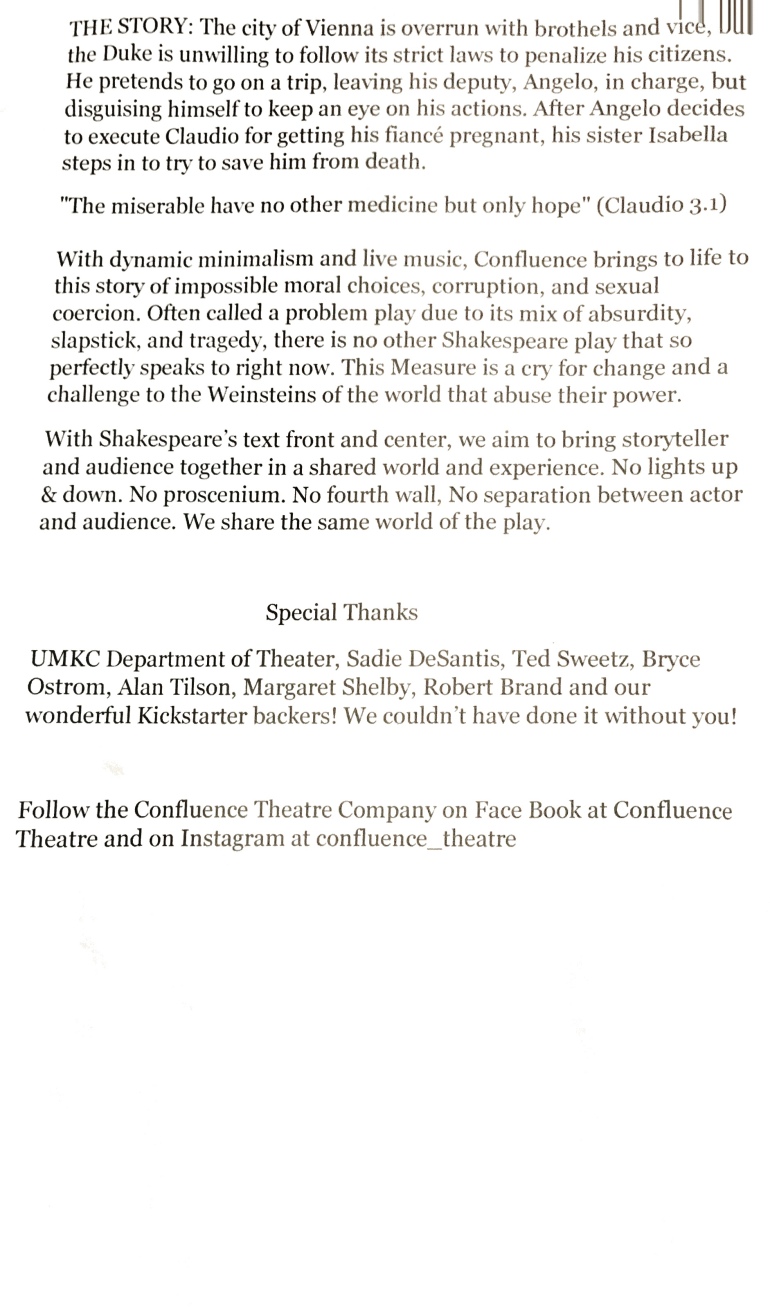 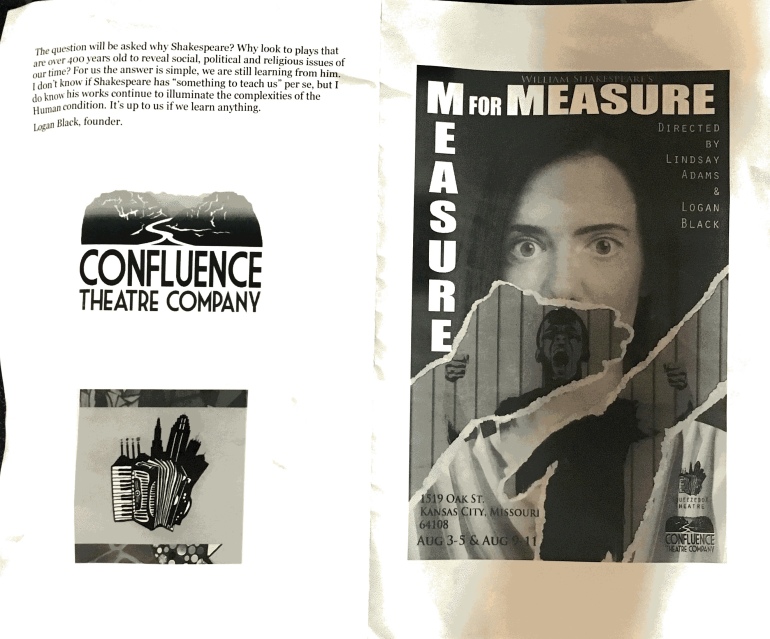