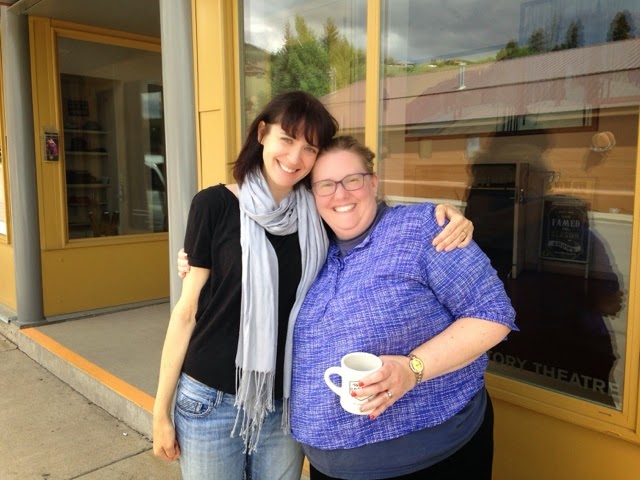 Day 2 in Creede! Got to spend some time with Kate before her set of shows today. We are outside the Ruth theatre here.
First show of the day at the Ruth theatre was ‘Hope and Gravity’ by Michael Hollinger. I’ll be seeing Ghost-Writer by the same author in a couple of weeks at the Spinning Tree Theatre in Kansas City.
There are shows that are created by actors for actors, or shows that highlight technical elements that cannot be divorced from the production.
‘Hope and Gravity’ is a writer’s production. Two of the play’s characters are writers, and the engine is the perspective of a writer. I appreciate and love large productions, but what I love about live theatre is the smaller dialogue exchanges that actors realistically volley back and forth.
Hollinger and Mamet are similar in this way – heartbreaking, believable misses and choices that are wrapped up in small moments that are expanded to bigger themes. Can we take something small to be a sign, or a miracle, even if it’s a catastrophe?
As the author says himself, “Theatre dares to promise that we’ll be more interested after sitting in our seats for two hours than we were when we first sat down. So we’re all aspiring to engage an audience of fellow human beings, to thrill them, educate them, move them, then release them and send them home, hopefully with a little piece of ourselves inside.”
The set pieces, which had to change to go back and forth in time and place, were impeccably executed. Even though the scenes were cut out of order and referred back on others, it was able to be followed. Mandy Heath and Jacob Welch created a deep and gorgeous lighting design that helped drive realism when it was needed but created a beautiful back glow on the most gorgeous tree set piece. Original music, by Tina Watson and Jake Harbour, became its own character and set the tone the moment the audience entered the space. All of the actors were impeccable, but I was most impressed with John Arp. I didn’t realize until afterwards that he played both roles of Marty and Douglas as his physical and vocal range were so varied. I wish I could watch this show at least one more time before we had to leave.
In true repertory (whiplash style), the evening production, ‘The Secret Affairs of Mildred Wild,’ was a prop and costume heavy production. At the pre-show talk with the dramaturg, she explained this show was from the “magical realism” genre; a woman uses movies to escape her mundane life.
The stage manager, Leigh’Ann Andrews, has to be in top form during every show. There are phones ringing, flying rocks, a King Kong hand, a live phone conversation paired with TV background noise, and actors going in and out of trap doors. There were some hiccups in tonight’s show – some missed phone ring cues, some forgotten song lyrics – but for the amount of insanity it was well executed. Christy Brandt, 40 year CRT legend, played Helen Wild in the 1976 production of Mildred Wild, and is now reprising her role. What longevity with one company, and how fun to reprise a role years later!
The show was stolen by Zlatomir Moldovanski, who hammed it up in a fairy dancing girl outfit, a Mammy (Gone With the Wind) outfit, and a sleazy 1970s producer. I would have loved to see more of him in an improv capacity this weekend.
As our theatre weekend vacation comes to a close, we are so grateful we came. Creede Repertory Theatre has a rich history and a bright future; I am sure their 50th season will be a great celebration next year.
Www.creederep.org
Www.spinningtreetheatre.com