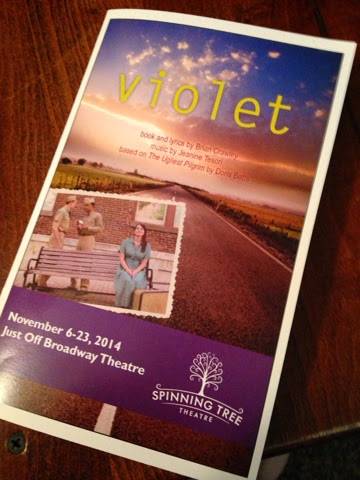 Okay, I almost didn’t see the show because I began to doubt the Just Off Broadway Theatre actually existed. If you’ve never been there before, PLEASE read their website directions and follow those. It’s under a bridge, through an enchanted forest, somewhere near but not quite under the WWI memorial and the Federal Reserve and the Roasterie.  (Which may or may not be true. I drove in circles and by the time I found it I may have entered a new dimension.)
Once arriving, however, it is a delightfully sweet theatre in a black box. The house was 3/4 full which I was surprised by because the reviews have been very good and it was excellently done. Hopefully, word of mouth will spread.
I have been impressed by Andy and Michael. (I think I’ve said this before). They are extremely sweet human beings and are very welcoming. They give hugs and thank yous even though they’ve only met me a few times, and they take time to greet their patrons.
As a season ticket holder, when I came in, I had a laminated tag for my own seat that specified it was for “Jessie Salsbury, season ticket holder”. Now, these are little things, but they set Theatres apart. It gets the rest of the audience thinking about membership, but it makes the season ticket holder feel like a member of the company, and proud of their membership.
This, as if said, is the “little theatre that could….and the little theatre that is!” Violet was a layered story, even more poignant that the disfigurement of Violemt isn’t evident on her face, but something Lauren Braton and the other actors have to make the audience see with gestures and responses. (I could write a whole review on Ms. Braton’s physical presence and work in this production; it’s masterful.) Julie Shaw has to communicate the horror of the disfigurement by her dialogue delivery and her response. We see the scar and mashed cheek and crushed nose. “On your imaginary forces work,” indeed.
Matthew A. King and Daniel Beeman are a great pair as Flick and Monty as Violet’s competing love interests. Their voices are also a sharp contrast. Mr. Beeman has a rich, sweet tenor while Mr. King has what I would call a “clear out the room you can hear that young man sing from across a football field.” I did not expect that big of a voice to come out of his mouth: that was amazing.
Ms. Braton, Mr. King, and Mr. Beeman singing together? They could tour and never be broke another day in their lives.
The supporting cast was phenomenal. This show is known for the climactic scene with the TV preacher and the choir, and this group lived up to the show. Jake Bartley, I had to cover my face with my scarf. He was so into it, the dancing and waiving his hands, him dancing in this scene and telling Lianna McKenzie before her bring the house down solo to “take your time, girl” was worth the price of admission alone.
This show is quirky, I wouldn’t call it fun, it’s thought provoking, and moves you to think the way you view yourself and how others perceive you. The most interesting part to me is the bus scene after Violet mistakenly believes she is healed. No one looks or reacts differently. Is that simply because she believes she is now beautiful and worth looking at? It’s a small, understated moment, but maybe one of the most important in the production.
I have saved up money to donate to a theatre, a tradition I will continue each season. The competition will be random; there were set rules in my mind for who would win the “Brick Street Theatre Company Donation of the Year.” Recipients will be Kansas City local theatres, but it could branch out to random ones across the country that I believe deserve their best chance. If you would like to be considered for the 2015-2016 season’s award, put a note comment on my blog!
Why did I decide to donate this saved money to the Spinning Tree Theatre? I’ve observed other local Kansas City Theatres. Some didn’t fare so well on my checklist as far as patron services, treatment, and responsiveness. Some were a close second or even a tie. Spinning tree, as far as patron care, went above and beyond and was the clear winner, and since they’re new, I wanted to give them my support.
What was the deciding factor on the prize? There was a sign on my seat that said I was a season ticket holder.
(And every time I talk to Andy or Michael they talk to me like I’m a friend. And, of course, they do great theatre.)
So, the donation may be small, but I wanted them to be recognized, and to know that they did win a competition (even though it was a one woman competition with a medium size prize).
It’s the little things.
Who will win the 2015-2016 Prize? I’m not telling you next year’s criteria. Keep doing what you do. If I don’t know about your theatre, tell me, so I can attend.