Skip to content
This play is hard to explain. (Pun intended). Basically, John has a long term boyfriend, M, and goes out with a woman, W. John is confused about his feelings and sexuality. And M’s dad, F, puts in his two cents which doesn’t help. All played out without props, just a set laid out like a boxing ring and four actors.

90 minutes. No intermission. A ding of a bell signaling the next movement. Actors spitting on each other but never touching at all. Circling. Everyone in gray but the love interest in red like a red flag at a bull fight. Amazing. Dizzying.

The writing in this is like being dropped in the middle of a conversation where you want to interject by yelling at everyone involved. It’s beyond snappy. Everyone was brilliant, but Zachary Andrews (M) was something incandescent. He had to be somewhat of a bastard, but likable at the same time. He had to be angry but testy, fed up but not willing to stop. Everything circled around him, and if that actor hadn’t been magnificent, this show wouldn’t have worked. Everything plays to him.
John, played by Jacob Aaron Cullum, is written as milk toast, as someone with no spine and no direction. That is difficult to play as an actor without coming across as low energy. It took a while to catch what was happening, and then I saw John with

Molly Denninghoff. John was himself. But sweet. Communicative. With new mannerisms but the same confused core. It’s easy to downplay Jacob’s brilliance in light of Zachary but he did exactly what he needed to do. We hate John because he won’t make up his mind. His silence is infuriating.
The end scene, the farce-like dinner party, is so brilliant. It’s written well, and the fight between (F), Matthew Rapport, and

Molly Denninghoff is controlled and then on fire.
The whole show is angry, seething, a bit of sweet, but quite a ride. Not for the faint of heart. Well done. 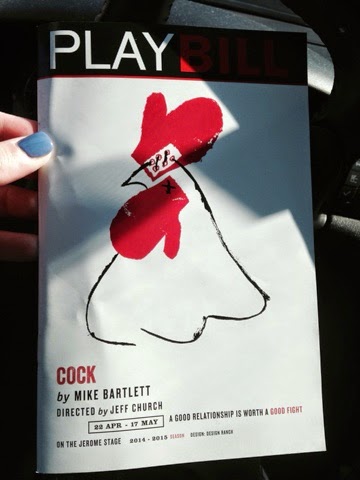 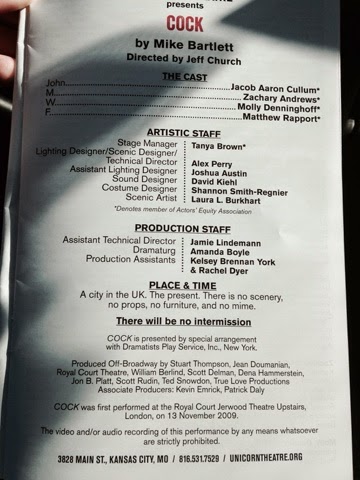