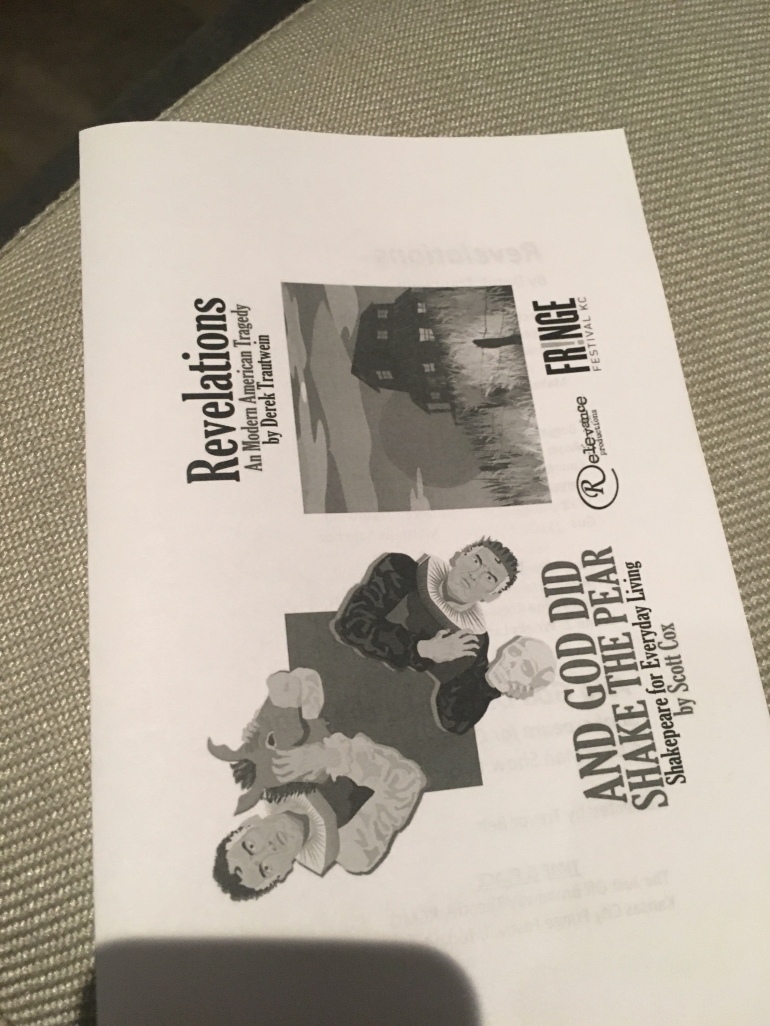 Short Review: Loved it! Well acted. Well written. Don’t want to give anything away. Can’t believe the set they loaded in 10 minutes!!

Fringe is great because it separates the professionals who can act and learn quickly, as rehearsals are short and tech time is limited. The cast brought energy to the stage from the minute it started.

Scott Cox’s Benjamin is scary good. The man looks like he could be a teddy bear but he plays his voice with steel underneath, and slowly unravels as the play progresses. His religious convictions are strong that the Lord has brought the Risen to test them, and they must keep strong in their faith to persevere. Jessica Franz was exceptional in her ability to get the audience to empathize with her situation as Rose and the panic of following her husband into a maddening situation in the face of wavering faith. Steven Covert brought Lawrence to life, not a sheep, but a young man that was attempting to do the right thing in the face of his father’s pressure to work out of his depth. Iliana Miller brought the right mix of young girl energy and terror in the light of such a situation. Derek Trautwein, Walt, and Matthew Sanchez, Gus, pushed and heightened the stakes towards the climax and conclusion. The ending with Benjamin and Walt could have been hokey or over dramatic, but it was wonderfully done. I don’t want to say more and spoil it, but this is one that you shouldn’t miss!

Trevor Belt, Mark Hill, Derek Trautwein and Marc Manley all need to be commended for the technical work on the show. A lot of props and business had to be on the set for the show to work, even bare minimum, for proper sound effects and action.

For the writing, sometimes the playwright writes something in the script that they intend, and sometimes it’s a happy accident. As I watched it, I couldn’t help but notice the theme of being trapped in a conservative, Christian marriage that seems to be working on the surface but is actually deeply dysfunctional, and literally leaves the wife trapped. Though it seemed to slow the action down, I think it’s extremely important we heard about Benjamin and all his conversion and gospel discussions, and that’s how he met his wife. This play appears to be more than just an apocalypse tale on the surface, and I think, if given the room to breathe outside of a Fringe production, there’s more to the onion to peel away.