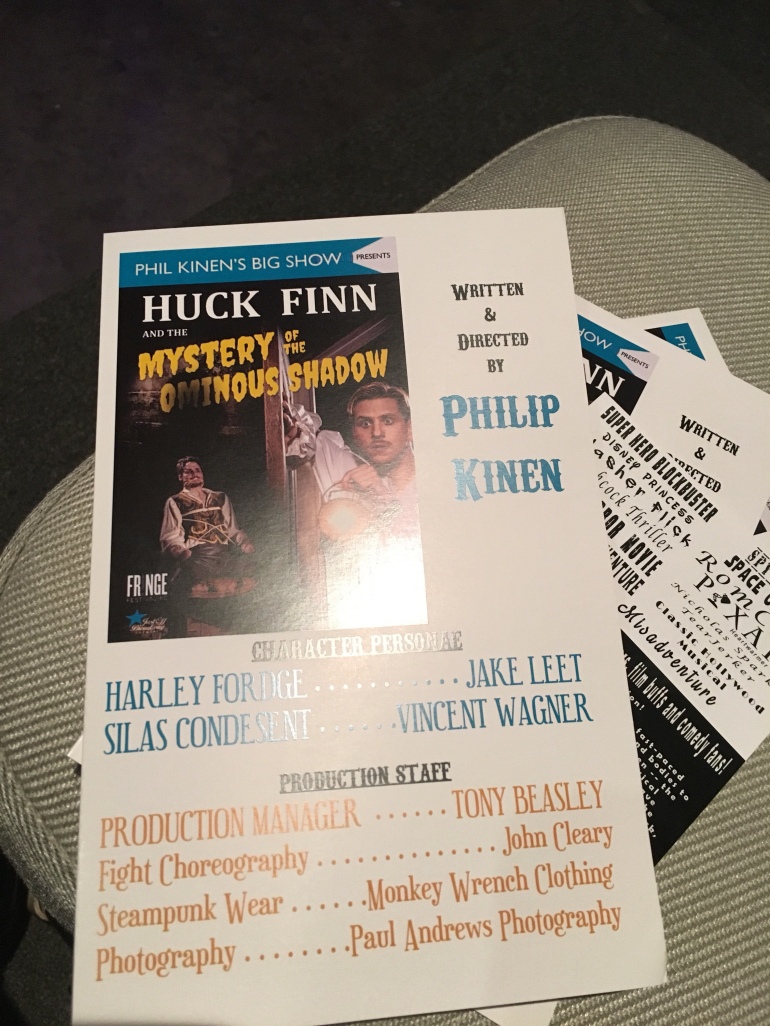 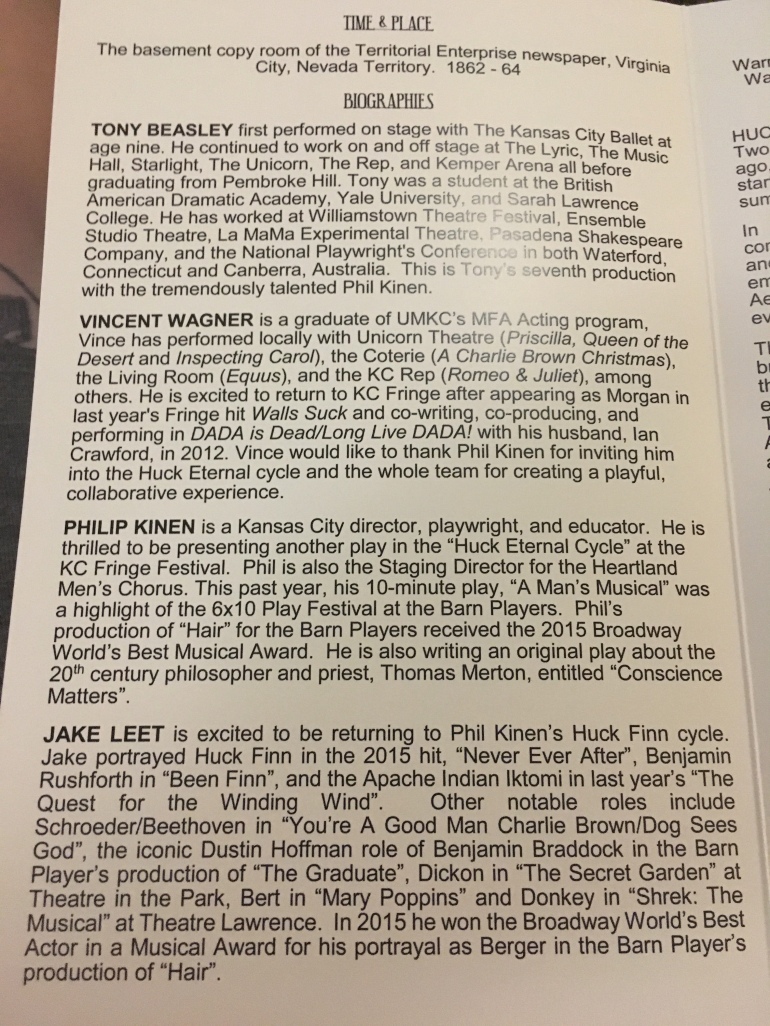 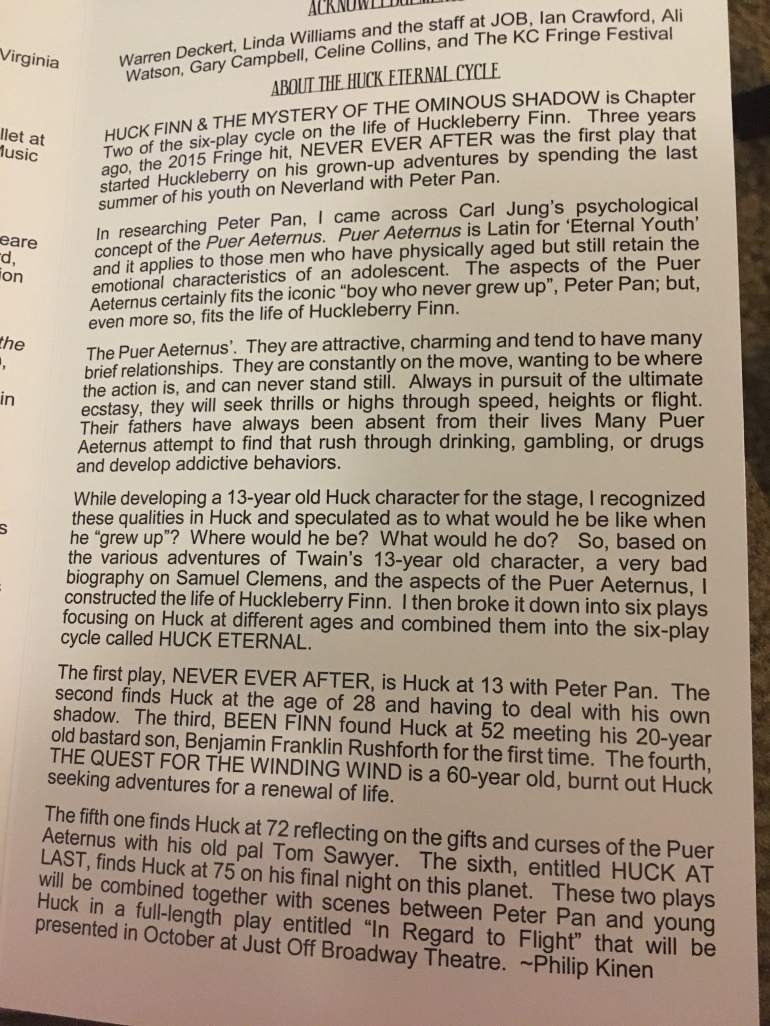 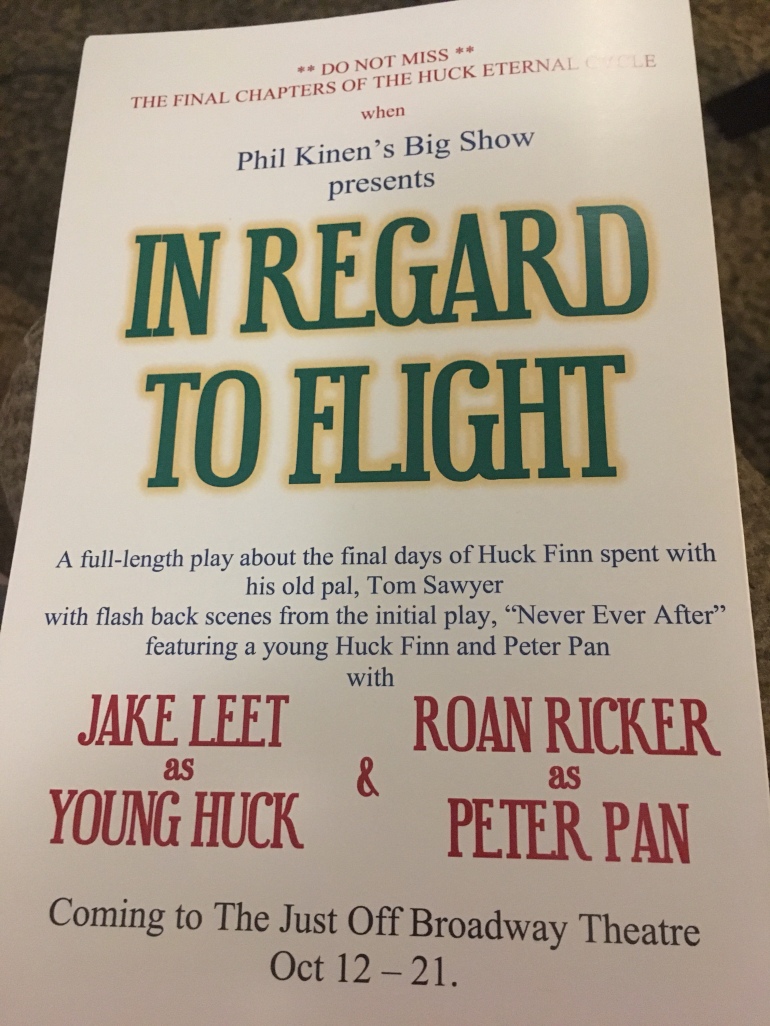 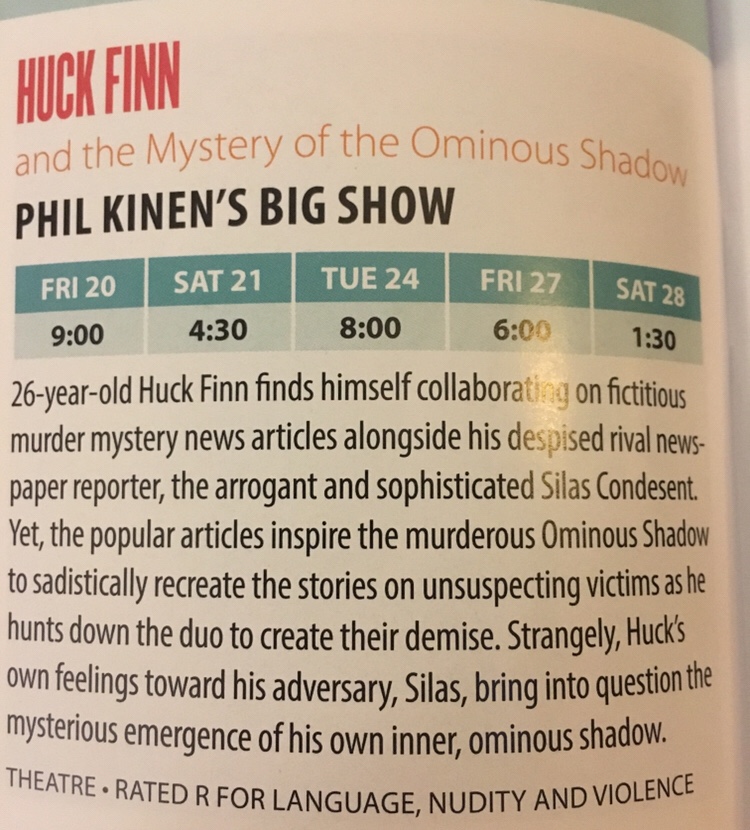 Phil Kinen and his Huck Finn cycle have gotten a lot of buzz from the KC FRINGE festival, and I finally got a chance to see why. Phil has created an amazing world where Huck Finn, rather than the creation of another author, is his own person, and is desperately trying to forget his old ways to become more sophisticated and educated. He is moving forward in his life after trying to leave his uneducated self behind, but uses his stories from childhood to gather money when he needs it. On top of this, he is now faced with working with a rival, Silas Condesent, who turns out to be more than he is just on the surface, who pulls Huck Finn / Harley Fordge to reveal more about himself. Fordge and Condesent’s relationship is delightfully complicated and volatile throughout the work.

The entire beautiful action is told, as you would expect from a work set in 1862-1864, with long flowing monologues and poetic explanations. Jake Leet, playing Harley Fordge, must alternate identities as well as narrate for the audience, which fits nicely for the narrative and the period in which the piece is trying to invoke. The minute Vincent Wagner walks on stage as Silas Condesent, however, I dare anyone to keep your eyes off of him. He demonstrates each story with calculated movements and gestures. I have never seen calculated and flowing gestures like that work in a piece. It makes the two times he is not in complete control of every movement even more jarring. Don’t misunderstand me, however. As mesmerizing as Vincent Wagner was, Jake Leet was not lost or upstaged. He had to carry the play forward with his range of emotions and layers of characters, and walk us through his complicated emotions towards Silas. They were perfectly paired.

John Cleary, as fight choreographer, did an exceptional job with his contribution, as the fight had to have a subtext that played out later in the work. Sometimes, fight choreography can stop or jar, but this flowed perfectly and naturally with both Phil Kinen’s direction and dialogue. It was not superfluous but necessary for the character tension, as would be revealed.

The costuming was amazing, hinting of years ago but obviously a hint of modern steampunk, and a simple set allowed the actors to use all the beautifully crafted language and body movements to tell the story. I am excited to see ‘In Regard to Flight’ in October.

I sincerely hope you catch this show. I have included Phil’s program notes to whet your appetite for it.